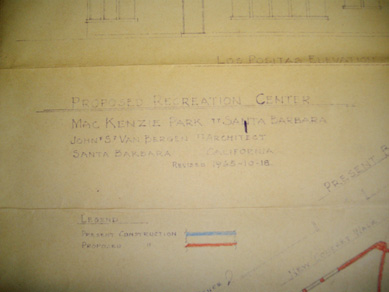 John Van Bergen had retired to Santa Barbara in the 1950s, only to find his career rekindled after clients, impressed by the house clinging dramatically to a mountainside that he designed and built for himself , began soliciting him for commissions for their own homes and businesses.

John and his wife Ruth also became involved in many civic and social organizations around the city, thereby building relationships with city officials and other prominent citizens. Then Santa Barbara Mayor Abbott was one of those people.

MacKenzie Park in the city of Santa Barbara, California has been well known for decades because of its popular public bowling green. Beginning with a request from Mayor Abbott around 1961, Van Bergen toyed with an idea of finding a practical use for an old abandoned water tank in this public park in. He worked up with several schemes, but the project never was carried out.

These drawings show a building that has almost a nautical theme, though the park is in the midst of the city, and not particularly close to the Pacific shoreline. Or maybe, it is idiomatic of the many modernist forms peculiar to the 1960’s. Kind of “the Jetsons meet Santa Barbara”. A similar design by Van Bergen is one for the Santa Barbara airport terminal from 1957.

The old water tank must have been a well built, solid structure for it to be considered as the basis for a new structure. From the sketchy information I have been able get, the tank was built to supply drinking water for the city in its early years, but by the 1950s or ‘60’s the area had outgrown the tank’s capacity. The structure still stands today, used by the Park and Recreation department as its main storage facility. 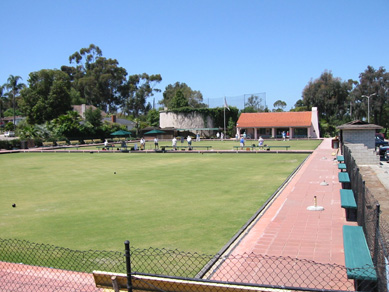 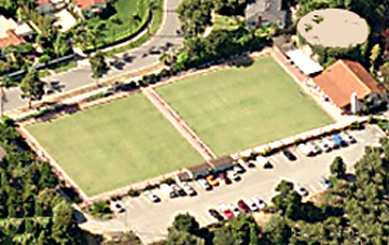 A separate small building used to house pumps, that Van Bergen also proposed incorporating into the new structure, has since been removed. An new club house has been built adjacent to the water tank and bowling green. Here (below) is a modern view from atop the water tank looking over the park’s ball fields, opposite the bowling green. The view also looks out to the Santa Ynez mountains, Santa Barbara’s gorgeous vista to the north: 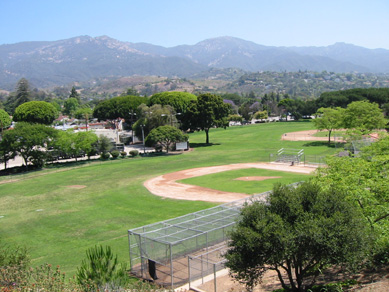 Van Bergen’s unbuilt structure was not only designed to include locker rooms and a club house with kitchen, but also to house an auditorium and a small branch public library.

The idea of the library brings us to an interesting connection back to Chicago, Van Bergen’s home city (he grew up and began his career in suburban Oak Park). Maybe Van Bergen was drawing partly on history with this design. Chicago’s first public library was housed in an old iron water tank before the new one (now the Chicago Cultural Center) was built on Michigan Avenue in 1897.

These drawings were left to me by Nancy V.B. Brigham, John Van Bergen’s daughter, when she died last year. I am forever grateful to her, and I miss her.

Thank you Jason Bryan in Santa Barbara for information and current photos!

This entry was posted in Uncategorized. Bookmark the permalink.